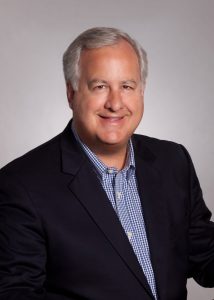 Tom began his insurance career at John Hackney Agency in 1980, a year after graduating from the University of North Carolina at Chapel Hill. After selling real estate during the first year after college, he decided to give the family insurance business a try and with that inauspicious beginning, a successful insurance career was born.  Just as his father, grandfather and great-grandfather had all done before him, Tom has worked hard to make sure the agency continues to grow and flourish.  He has learned the key to success is simple:  an honest assessment of each client’s risk and the best possible insurance program to meet that need.

The real success of the agency isn’t one person but the very best people in the industry helping customers and working together as a team every day. Today there are two offices, one in Wilson and the other  in Rocky Mount, that employ 37 people. Many of Tom’s co-workers have spent the majority of their career at the agency and continue to help guide and manage the success of the business. He is very proud to have assembled the strong team of people at John Hackney Agency because it’s these folks who make Hackney the wonderful and successful agency it is today.

Tom was born and raised in Wilson, but was lucky to spent every summer with his grandparents at Atlantic Beach.  He still loves the two places he’s always called home, spending weeks in Wilson and most weekends at the coast on the same street where his grandparent’s old cottage was. He married Susan King Hackney, now an attorney at K&L Gates, in 1980 and they have two wonderful daughters, Elizabeth and Anderson.  Elizabeth is married to Joe Davies, and they are the proud parents of Alex and Page.  Anderson is married to Campbell Brown, and they have one daughter, Becca, as well as two dogs who are treated like children, Cotton and Sawyer. Both the Davies and Browns live close in the Wilson suburb of Raleigh.

Tom is grateful for his wonderful family, his incredible co-workers, his successful business, and his good friends. Call him for help with any type of insurance you might need.