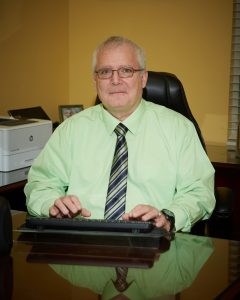 Mark began his career in New York State in 1984, selling insurance to the restaurant industry for years. He then moved to Maine, delivering insurance products for lobster, shrimp, and crabbing sea vessels with AIG’s marina program. These were great days when he learned how to insure fish houses, wholesale fish markets, and seafood processors. While in Maine, he enjoyed those pleasant summers, typically in the mid-seventies in the summer; however, the trade-off was winter months, with significant snow, and thus started the journey for an insurance agency in the south.

In 1994, he joined the John Hackney Agency, where he began in their New Bern office and later moved to Wilson, where he lives and works. It was here that he began to appreciate the southern lifestyle. He also experienced North Carolina’s challenging hurricanes while experiencing the finer points of debris removal and other insurance coverages unique to Eastern North Carolina. John Hackney Agency is a place where he appreciates working because of the family atmosphere. It is an agency that genuinely cares for its employees, backed by ownership that passionately supports its producers and account managers. Mark finds it hard to believe he has been in the insurance business for 38 years, especially since his career started at Bible College and ministry in 1978.

Mark is married to Connie and has three daughters, Amanda, Rachel, and Emilee, and five grandsons, Franklin, Finnigan, Fillip, Finton, and Bradley, with another due in June of 2023.

Furthermore, Mark enjoys the day-to-day challenges of the insurance business and considers himself a student in this ever-changing industry where learning never ceases. His experience affords a depth of understanding to communicate the difficult-to-comprehend coverages, which is priceless, and he offers it to every client regardless of their need for protection. Mark is your typical board-based generalist in commercial accounts; however, Mark places particular emphasis on trucking, construction, the health care industry, and wholesalers.